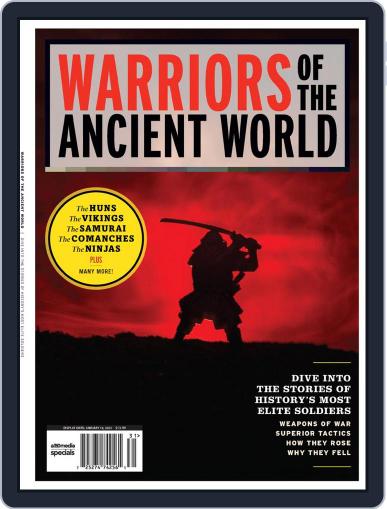 About Warriors of the Ancient World

The Vikings. Comanches. Amazons. Huns. Around the world and across cultures, history has been shaped by small bands of noble warriors driven by honor and glory, whose mighty exploits empowered kings and destroyed cities... and whose names still resonate today. A deep dive into who these elite military superheroes were, how they lived, why they triumphed, and how they were swallowed by the sands of time. Plus: Favorite weapons (like the Samurai sword), key battles, game-changing tactics (like the Phalanx of the ancient Spartans), and the fearsome leaders who inspired the most feared warriors the world has ever seen.

The number of issues included in a magazine subscription (frequency) is subject to change without notice. Additional double issues may be published, which count as 2 issues. Applicable sales tax will be added. Offer void in Vermont. Magazine covers are used for illustrative purposes only and you may not receive a copy of the particular issue depicted. Your subscription will include the most recent issue once your subscription begins. Magazine covers are the property of the publisher. This site is not officially affiliated with, associated with, or endorsed by Warriors of the Ancient World or the publisher.