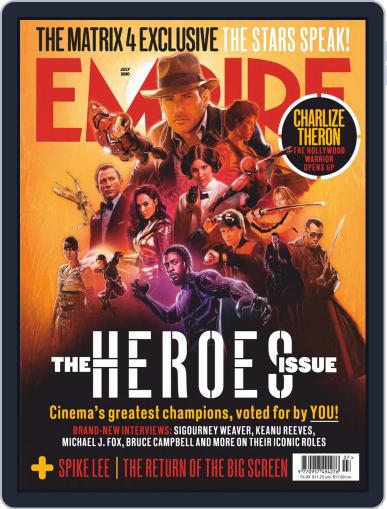 Empire, the premier movie magazine, brings to you the latest news and updates on movies and shows you love and are excited about! Bringing with the news, Empire delivers the most authoritative, insightful and independent reviews in the industry today. Empire's incredible insider-access brings you the interviews with A-list Hollywood stars that no-one else can get. All served with an irreverent sense of humor and unparalleled movie knowledge. Get the most out of the latest and greatest movies with Empire!

Receive the latest reviews, and insight into the next blockbusters with Empire’s movie reviews. Whether it is an artisan film that strays from the mainstream of blockbusters or the next highly anticipated star-studded action film, you can count on Empire’s experienced editors to give you a taste of what is to come.

In addition, with Empire’s early access to interviews with directors, producers and actors alike, get to know the details of how movies came to life on the silver screen. With screen breakdowns, script snippets and cinematography knowledge galore, movie buffs will find something to take away from every page. Experience the brilliance and creative geniuses behind and in front of the camera with Empire Magazine.

Get the latest raves and reviews on the newest video games that have hit the market. Much like our movie reviews, you can trust in Empires’ independent and insight based reviews to determine which game should be stored in your hard drives or find a place on your shelves. From platformers to Shooter RPGs, find the review you’re looking for with Empire.

Magazine covers are used for illustrative purposes only and you may not receive a copy of the particular issue depicted. Your subscription will include the most recent issue once your subscription begins. Magazine covers are the property of the publisher. This site is not officially affiliated with, associated with, or endorsed by Empire or the publisher.