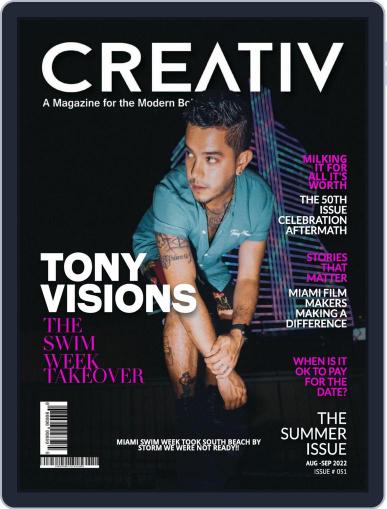 CREATIV magazine has launched on April 20th 2013. Created by The CCWC Network Corp and formerly known as The C Magazine, we take pride in showcasing raw talent found right here in our community, while focusing on the arts we also open doors for small business owners by facilitating the reach of their audience by means of our competitive advertising outlets. Representing the most diverse city of eastern America, the city of Miami. Where Caribbean culture meat southern country. We are the voice of the unsung heroes. Our priority is to give you a platform to be seen and to be heard. Our magazine shines the light on men and women doing marvelous things in their community, those with a touching and inspiring story, those who take life by the horns by remaining heroes.

The number of issues included in a magazine subscription (frequency) is subject to change without notice. Additional double issues may be published, which count as 2 issues. Applicable sales tax will be added. Offer void in Vermont. Magazine covers are used for illustrative purposes only and you may not receive a copy of the particular issue depicted. Your subscription will include the most recent issue once your subscription begins. Magazine covers are the property of the publisher. This site is not officially affiliated with, associated with, or endorsed by Creativ or the publisher.