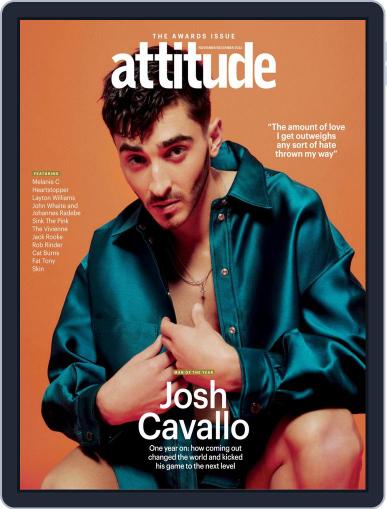 The World’s Best Gay Magazine. We pride ourselves on exclusive content and we are the premier destination for film, music, sports and pop stars plus LGBT heroes and allies that want to speak directly to gay men. Each issue has a balance of features on a diverse range of subjects, with block busting A-list celebrity exclusives and in-depth analysis of news and issues affecting the LGBT community. No other gay magazine can come anywhere near Attitude’s star pulling power, with celebrities such as James Franco, Tom Hardy, Elton John, Sacha Baron Cohen, Ian McKellen, Liam Payne, Take That, Matthew Lewis and countless more giving exclusive gay press interviews to us. Plus we have the likes of Paris Lees, Matt Lucas, David Furnish, not only appearing in the magazine but also writing for it.

The number of issues included in a magazine subscription (frequency) is subject to change without notice. Additional double issues may be published, which count as 2 issues. Applicable sales tax will be added. Offer void in Vermont. Magazine covers are used for illustrative purposes only and you may not receive a copy of the particular issue depicted. Your subscription will include the most recent issue once your subscription begins. Magazine covers are the property of the publisher. This site is not officially affiliated with, associated with, or endorsed by Attitude or the publisher.