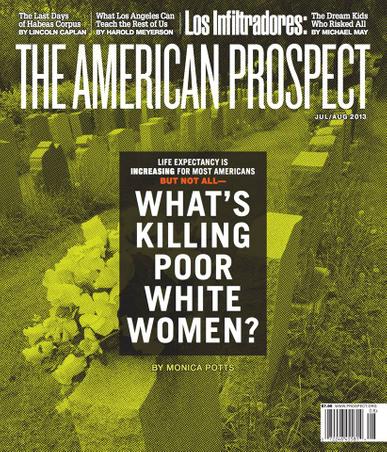 American Prospect is a magazine that brings the hard-hitting issues straight to your mailbox. Every issue features articles about culture, politics, and features called “longforms.” The articles in this magazine will always provide you with information that impacts both the United States and the world. Support the journalism that truly matters by subscribing to this publication today!

Politics that Matter
American Prospect magazine provides you with articles in every issue about political events that impact various aspects of your life. The features include subjects such as the economy, energy and the environment, gender and sexuality, health care, immigration, labor, science and technology, and the happenings of the world. All of these articles will help you to be as informed as possible about every political issue that influences today’s world. You will never have to rely on others as sources on which to form your political opinions because you will have this political periodical to keep you informed.

Cultural Issues that Influence the World
The main factors that influence the culture and opinions of society are books, film, and television. American Prospect provides you with reviews and critiques about the most popular works of literature and film. The reviews will help you decide what works are worth your time. With every publication, you will also be provided with numerous articles about sports, architecture, art, language, media, and music. There is not an aspect of culture that this magazine does not provide you coverage of. A discount subscription to American Prospect is a subscription to culture.

The Longform
The longform portion of the magazine provides you with hard-hitting articles about issues that influence society for generations rather than months. Some of the articles contain topics including the future of political parties, the responsibilities of Congress’s finances, various political movements, and so much more. A subscription to American Prospect ensures that you are aware of the cultural and political implications of events both today and in the future.

Subscribe today to politics and culture with a discount subscription to American Prospect magazine!