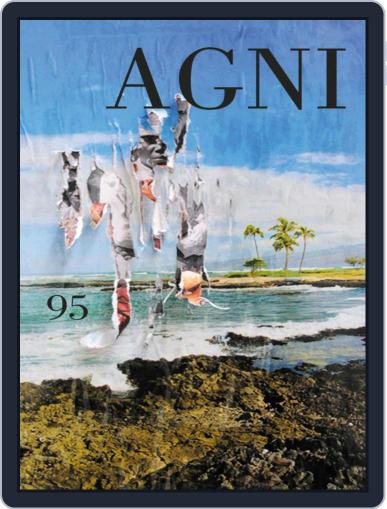 A “workshop of literature, where wonderful, audacious and strange things come into being.” —Bernhard Schlink, author of The Reader AGNI is a literary magazine housed at Boston University and known “among readers around the world,” as the writers group PEN put it, “for publishing important new writers early in their careers, many of them translated into English for the first time.” E. C. Osondu won the Caine Prize for African Writing; we had begun to champion his work years earlier—in fact, his first and second published stories appeared in AGNI. Jhumpa Lahiri’s “Interpreter of Maladies” appeared in AGNI before becoming the title story of her Pulitzer-winning collection. Ha Jin was publishing his poems in AGNI when he was a graduate student at Brandeis University. Some of his earliest stories appeared here also, and he has gone on to win the National Book Award and the PEN/Faulkner Award, twice. Others include Susanna Kaysen, Mark Doty, Glyn Maxwell, Joan Wickersham, Cynthia Huntington, and J. D. Daniels. When they came to us, these names did not resonate the way they do now. It was the writing that captured us—and does still. Edited by writers Sven Birkerts and William Pierce, AGNI publishes two 240-page issues of fiction, essays, and poetry a year. The mission is straightforward: To bring our reader into the living moment, not as a tourist but as an engaged participant. And—as means and method—to champion writers who engage the world in and around them, shaping their words so intimately that the ripple of their seeing and the quirks of their thinking become part of the portrait.

The number of issues included in a magazine subscription (frequency) is subject to change without notice. Additional double issues may be published, which count as 2 issues. Applicable sales tax will be added. Offer void in Vermont. Magazine covers are used for illustrative purposes only and you may not receive a copy of the particular issue depicted. Your subscription will include the most recent issue once your subscription begins. Magazine covers are the property of the publisher. This site is not officially affiliated with, associated with, or endorsed by Agni or the publisher.